First things first: I’ve run into all kinds of time-consuming headaches trying to upload my photos on the blog. Also, Heather’s pictures are far better than mine, and she takes far more of them than I do, so if you’d like to see as well as read about what we’re seeing, check out her Instagram feed.

If, as Ortega y Gasset wrote, “a translation is not the work itself, but a path towards the work,” then the transliteration of the Armenian for “thank you” is not the word itself, only a path toward the word, which is usually rendered shnorhakalutyun. You can use phonetics to sound that out, and after a handful of tries get close enough that an Armenian will correctly understand you rather than reply gesundheit, but you won’t quite have said thank you. That may be partly because the Armenian alphabet contains thirty-nine characters. There are a lot more sounds they can make with their mouths than we can with ours, and a handful of them seem to be required in saying shnorhakalutyun, because when we say it, we don’t sound like them when they say it.

We told our driver of our labors to say “thank you” in Armenian, and he was quick to reply: “It’s hard for us, too!” In fact, it’s so hard that Armenians will frequently say “merci” instead. Meanwhile, everybody twists their tongues around the native word, natives included.

I’ve often gone around thinking English is a difficult language: vexing inconsistencies in the grammatical rules; usage funhouses like there/their/they’re and its/it’s (which are actually really easy); silent e’s and all those other trickster letters and clusters of letters whose pronunciations are often only guessable from without; and by conventional measures the largest vocabulary among all languages—an abundance and variety that make English a wonderful language for writers, of course, but I wouldn’t want to try to learn it.

Except that it must not be that hard to learn, at least not the basics; otherwise, it wouldn’t be the international language. (I have no educated objection to the argument that it’s actually the international language of capital, not convenience, and that its spread owes to colonization, homogenization, etc.; but it would weary me to sit through this argument expounded on at length, as it will likely weary you to read all 4,000+ words of this post.) During our travels, Heather and I were told—by someone, I no longer remember whom; or maybe it was my Korean hiking pal, Lee—that English is actually comparatively easy. Nouns and verbs, we were reminded, are stable, and if you have the ones you need in your corral, you can pretty much get across what you mean in at least some rudimentary way. And for all that some elements of English can be slippery, it doesn’t generally, for example, change a word depending on its context or on who’s saying it, as other languages do; nor do we cram words and senses together to make more, really big words like shnorhakalutyun, thankyouverymuch. Despite its big vocabulary, English tends toward simplification. “They are” shrinks to “they’re,” that sort of thing.

Which takes me back to “thank you,” or even just “thanks.” END_OF_DOCUMENT_TOKEN_TO_BE_REPLACED 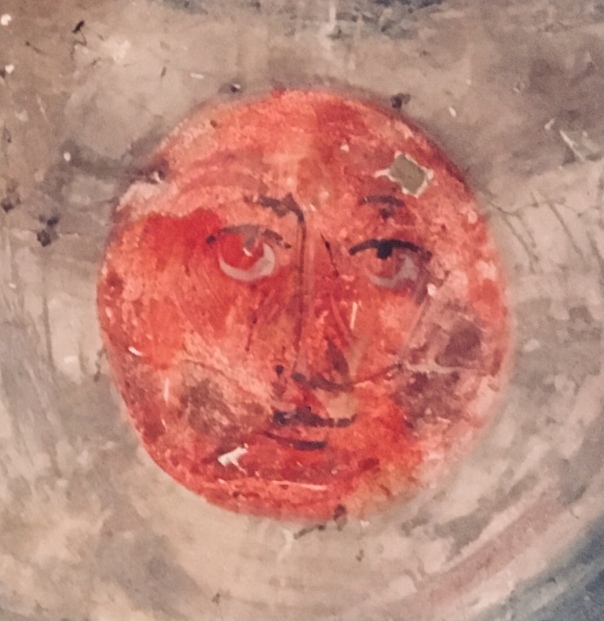 First, I don’t know anything about religious icons, or the schools that painted them. I went to another icon gallery yesterday, in Berat (to get a little ahead of myself), and there were those same long noses and bulging foreheads. What struck me as unique in Ohrid may not have been at all. Clueless! I shouldn’t have been so sure of what I was seeing, and remembered Stasiuk’s observation that unfamiliar objects can be perceived as no more than what they are in fact. (But I do think the Ohrid pieces, which were older than those housed in the Onufri Museum in Berat, were technically superior and more full of feeling. And none of the other saints look as sad as poor St. Clement, except perhaps for Onufri’s rendering of St. John the Baptist, into which it seems he poured most of his tears.)

Second, returning to Nell Zink’s line in The Wallcreeper about Albania, “Single mothers there dress and live as men”: I called Zink inclined to glibness, and she sometimes is, but this line is not an example! After reading the post, my sister sent me a link to pictures of Albanian women who really do dress and live as men. According to the artist Jill Peters’ statement:

“Sworn Virgin” is the term given to a biological female in the Balkans who has chosen, usually at an early age, to take on the social identity of a man for life. As a tradition dating back hundreds of years, this was sometimes necessary in a society that lived within tribal clans, followed the Kanun, an archaic code of law, and maintained an oppressive rule over the female gender. The Kanun states that women are the property of their husbands. The freedom to vote, drive, conduct business, earn money, drink, smoke, swear, own a gun or wear pants was traditionally the exclusive province of men. Young girls were commonly forced into arranged marriages, often with much older men in distant villages. A family suddenly without a patriarch or male heir would find themselves in jeopardy of losing everything. As an alternative, becoming a Sworn Virgin, or ‘burnesha,” elevated a woman to the status of a man and granted her all the rights and privileges of the male population. In order to manifest the transition such a woman cut her hair, donned male clothing and sometimes even changed her name.  Male gestures and swaggers were practiced until they became second nature. Most importantly of all, she took a vow of celibacy to remain chaste for life. She became a “he”.

END_OF_DOCUMENT_TOKEN_TO_BE_REPLACED

In the afterword to Lolita, Nabokov enumerates some very minor details of the novel, a few of them just a sentence or even a mere word, that most readers will have probably not even noticed. He calls these “the nerves of the novel. These are the secret points, the subliminal coordinates by means of which the book is plotted.”

Likewise, the subliminal coordinates of my Albanian ambit aren’t major figures like Lee or arresting moments like my encounter with the epileptic on the hilltop above Kruja. Those episodes are the flesh, muscle and blood of my experiences here. The bones and joints, what it all hangs on and what holds it together, is the actual travel.