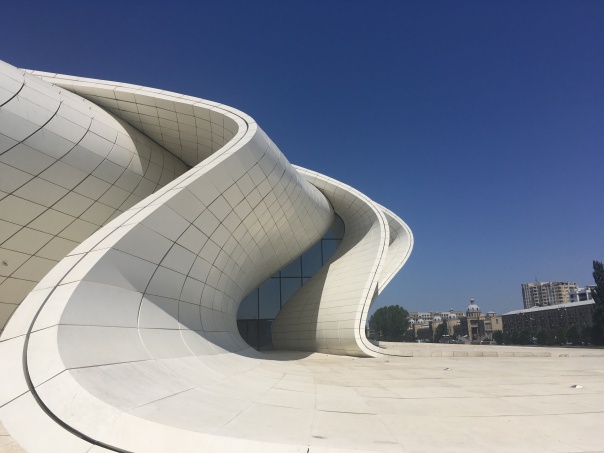 On the promenade by the Caspian, everything seems to be made of marble, even the underground passageway that leads to it from underneath the boulevard. Once you emerge, Russian ballet music is coming from somewhere: speakers mounted in light posts, it turns out. A sparkling white fountain is populated by statues of swans. All along the promenade runs a grassy park shaded with trees and lined with benches. One section of the promenade is called “Little Venice”: you go up and down over more marble steps above a network of canals where gondoliers row visitors in the twilight. At the far end of the promenade is an enormous, flower-shaped architectural wonder known as the pearl. Beyond that, around a bend, is a giant, glittering ferris wheel.

At nightfall, around nine o’clock, the promenade is at its most crowded, especially around the fountain of swans. The open plaza yields a good view up and away from the Caspian toward the “Flame Towers.” Once it’s dark, these three high-rises light up in undulations of red-orange, then sea-blue. (Or is it gas-flame blue? This is oil-rich Azerbaijan, after all.) Now each tower takes on its own color: one blue, one red, one green, the colors of Azerbaijan’s flag. After another minute, the image changes to a giant white-on-black silhouette of a heroic figure waving that flag. All around the fountain of swans, people are taking selfies with these images as backdrop, the music as soundtrack.

It’s something else (really, check it out), which I mean not as a figure of speech but as literally unlike anything I’ve ever seen. Baku might be the city of the future, yet perhaps the future it’s the city of will never come to be; if it does, it will have no America in it, because no American city has even begun to remake itself in the twenty-first-century image that cities like Baku are shaping. More and more, America seems to me a place caught between two eras: detached from the traditionalism that gives durable cultures the lifeblood that sustains them through epochal change (for example, in the part of Georgia we’re in now, they’ve been making wine the same semi-primitive way for hundreds if not thousands of years); but lagging way behind the innovation and reimagining that mark the vanguard of civilization. It sometimes seems plausible that the US is so stuck on and in itself, so paralyzed by its divisions and addictions, and still so pitiably longing for the late twentieth century (i.e. the time before 9/11 that we will wake up one day to find that the world we thought we were leading has taken an alternate and faster route to some completely different destination and left us still driving our cars to nowhere while civilization is soaring up and away to heights undreamt.

Meanwhile, as Baku leaps, probably too quickly, toward the future, there are so many metaphors for/symbols of its paradoxes of simultaneous obviousness and indecipherability, of novelty and backwardness, of stylishness and awkwardness, authenticity and counterfeit, wealth and poverty, that you’d have to be asleep not to notice them. Here are a few: