(This subseries, if it turns into one — which is doubtful — attends to auxiliary, secondary, or casual observations made outside but as an effect of formal randonauting, an activity which heightens the mind’s general awareness and alertness, and encourages it to find and tease out “random” connections.)

“You do not stop a jogger who is jogging. Foaming at the mouth, his mind riveted on the inner countdown to the moment when he will achieve a higher plane of consciousness, he is not to be stopped. If you stopped him to ask the time, he would bite your head off.” — Jean Baudrillard, America

I just recently read these lines, which are excerpted from a longer observation by Baudrillard of the American jogger. I’m an American jogger myself, and I tend to perk up at attempts to understand the “meaning” of this particular pastime and the people who engage in it. My interest derives not only from personal experience as a jogger but also from how uninteresting jogging actually is, both to do and to observe. It is a very difficult subject from which to draw much sense or sensibility.

There are direct efforts, like Haruki Murakami’s memoir What I Talk About When I Talk About Running, whose title, taken from Carver, is as deliberately flat as the long-distance runner’s experience of the miles. The only passage I can recall from this book has nothing to do with running at all. It recounts the moment when Murakami decided to become a writer, which occurred at a baseball game at the moment when a player who had hit a ball into the outfield pulled into second base for a double. Murakami’s life flashed in front of his eyes: not the life he was about to depart, but the one he was about to begin.

There is also the runner, and running, as archetype and metaphor, most famously in Alan Sillitoe’s short story The Loneliness of the Long Distance Runner. While running, “I’ve been asking myself all sorts of questions and thinking about my life up to now,” writes the narrator — identified only as Smith (perhaps appropriately the most uninteresting name in English). This thinking while running more closely resembles one’s life flashing in front of one’s eyes before death, but is categorically different, less a mortal reckoning than an incrementally updated accounting. With every run, a little more is added to “my life up to now.” Yet there isn’t an equal relationship between time input and thought output: “By God,” Smith blurts, “to say that last sentence has needed a few hundred miles of long-distance running.” END_OF_DOCUMENT_TOKEN_TO_BE_REPLACED

I’ve been reading Raoul Vaniegem’s Revolution of Everyday Life. The English title is completely different from the French original, which translates to something like Treatise on Good Manners for Young People. Vaniegem was a key player in the Situtationist International movement. The book was published the same year (1967) as Guy Debord’s much more famous Society of the Spectacle. Although it’s comparatively lesser known, I prefer Vaneigem’s book to Debord’s. It’s more impassioned.

One of Vaniegem’s central ideas is that real “revolution” comes when every individual lays claim to personal independence and desire — “each for all.” I chose “Individual” as my intention yesterday, with “Nonconformity” as an echo. The first Randonaut destination was right in the middle of one of downtown’s busiest streets: 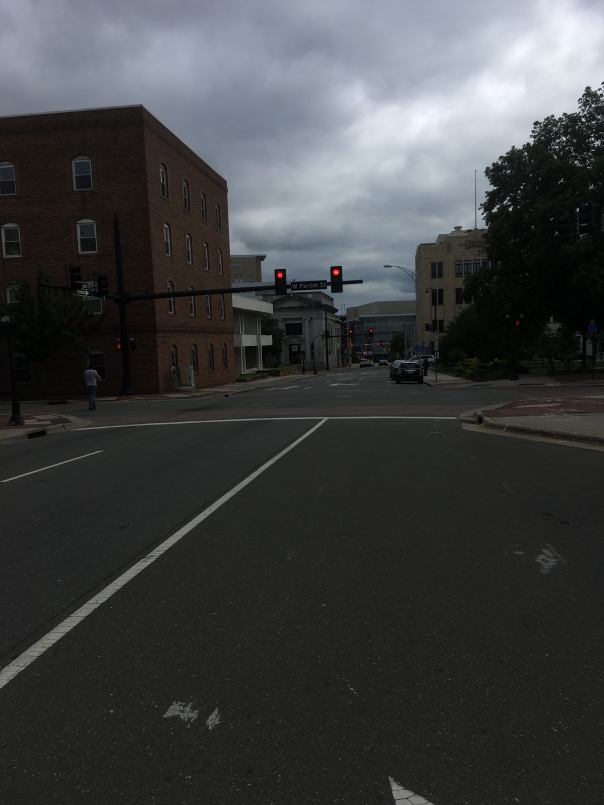 On the east side of the street are a couple of restaurants. When I left the house to go randonauting, I was feeling irked by some exasperating commentary about restaurants that I had just read.

On the way to the next destination (using “Attractor,” I think) I passed this convertible car parked on the street with its top down: END_OF_DOCUMENT_TOKEN_TO_BE_REPLACED