I’ve been reading Raoul Vaniegem’s Revolution of Everyday Life. The English title is completely different from the French original, which translates to something like Treatise on Good Manners for Young People. Vaniegem was a key player in the Situtationist International movement. The book was published the same year (1967) as Guy Debord’s much more famous Society of the Spectacle. Although it’s comparatively lesser known, I prefer Vaneigem’s book to Debord’s. It’s more impassioned.

One of Vaniegem’s central ideas is that real “revolution” comes when every individual lays claim to personal independence and desire — “each for all.” I chose “Individual” as my intention yesterday, with “Nonconformity” as an echo. The first Randonaut destination was right in the middle of one of downtown’s busiest streets:

On the east side of the street are a couple of restaurants. When I left the house to go randonauting, I was feeling irked by some exasperating commentary about restaurants that I had just read.

On the way to the next destination (using “Attractor,” I think) I passed this convertible car parked on the street with its top down:

The coordinates were in the parking lot of Durham Athletic Park, where the Durham Bulls played (they don’t anymore) when the movie Bull Durham was made.

Here is a movie still of the team bus — the one the real Durham Bulls actually used — a few feet from this same spot: 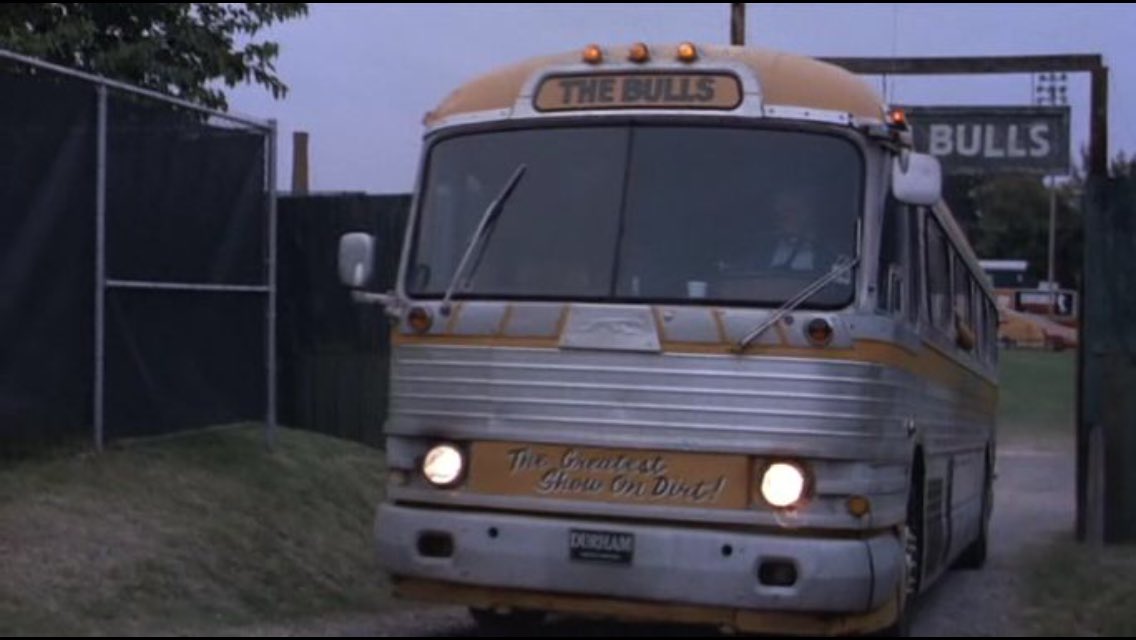 I rode in this same bus, around this same time, in my early teens, when I worked for the Bulls as an intern. I went on a road trip with the team and was permitted to travel with them. I have a very clear memory of the bus returning to this parking lot after a late-night drive back to Durham from Virginia. The bus parked and let everyone out virtually right on the Randonautica coordinates. It would have been around this same time of year, early summer. My stepfather was waiting for me in this parking lot (which wasn’t paved then). In my mind I can still see him standing next to his green Volkswagen bus, right here:

On the way to the next destination I passed this:

The sign on the red door says “No Visitors. Thank you.”

Then I passed this church:

This the North Star Church of the Arts. A closer look at its marquee:

The next coordinates were close to (or perhaps in) the garage behind a house:

Randonautica’s app often gives coordinates that are on private property. I couldn’t help wondering whether there might be something significant in that garage that I couldn’t get to without trespassing, which I was not inclined to do. This is part of the mystery of randonauting, that it leaves you occasionally just on the threshold of what could possibly have been an important discovery.

I set a new destination. On the way I passed what is known colloquially as “The Bull Durham House” because Annie Savoy (Susan Sarandon) lived in it in Bull Durham. Its official name is different:

The very first scene shot for the movie was the one that takes place in the backyard (or maybe the side yard) of this house, when Annie attempts to help Nuke with his pitching control. He resists; when he finally consents, his only pitch misses by so much that it breaks a window.

Across the street is a vacant lot in which there is currently a community garden:

The final randonaut destination turned out to be a block from my house. The coordinates were in the backyard. I know the owners of this house, but not through neighborhood proximity. They’re a married couple who have been regulars at the bar where I was working a little while back. It’s a coincidence that they live so nearby. (Or perhaps it’s a coincidence that they’re regulars at that bar.)

Another coincidence: about a year and a half ago, I had an emergency appendectomy, and when I went back to the hospital for my follow-up visit a couple weeks later, I was surprised when the woman who owns this house walked into the examination room instead of the doctor who performed the operation. He was unavailable that day, so he sent her in his place. I knew she was a doctor, but not that she is a former student of his. She moved to Durham because he invited her to work under him when he came to take a job here.