Yesterday I went Randonauting for the first time. Randonautica describes itself as “an attempt to research unknown spaces outside predetermined probability-tunnels of the holistic world and has become a fully functional reality-tunnel creating machine that digs rabbit holes to wonderland.”

How it works: “By using our quantum-bot“–the Randonautica app–“the user can break from their mundane day-to-day and take a journey in search of deep meaningful synchronicities.” Users have reported odd apparitions and eerie coincidences, surprising affinities between mind and matter, and other paranormal phenomena.

The app uses a “quantum random number generator” to find a point near you (you choose a radius before you begin) while you “set an intention” for the trip you’re about to make: “Our quantum-bot is built with mind-machine interfacing technology allowing the user to drive their trip via intentions,” the website claims.

Here is more about the project.

I chose the smallest travel radius, 1,000 meters, because I was on foot and wanted to do multiple Randonaut explorations. Then the app asked me to select from three options: “Attractor,” “Void,” and “Anomaly”: “Attractors are dense clusters of random points. Voids are the opposite. Anomalies are the strongest out of Attractor and Void.” It also asked me to choose “how many intention driven quantum points” I wanted to look for: one, two, five, or ten. I chose “Attractor,” one point, and set “Love” as my intention. Here is where the app sent me: 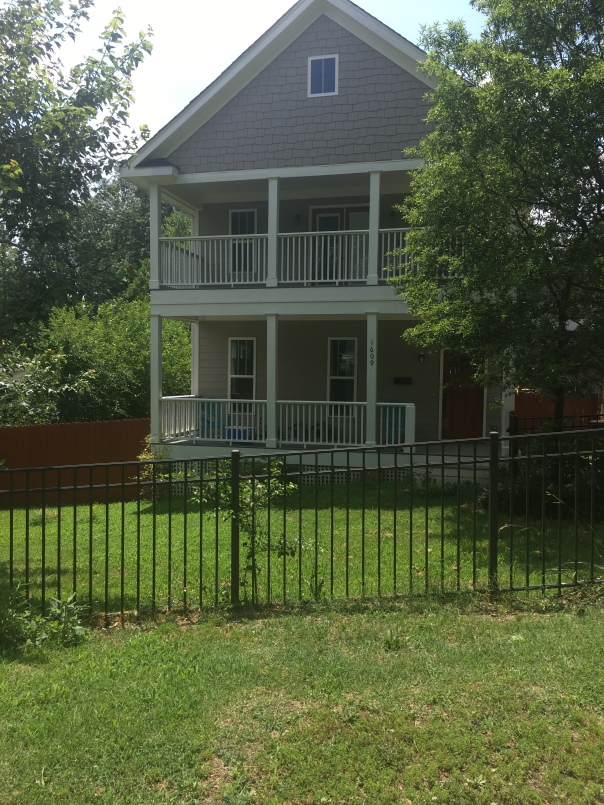 This house was on a street I had never been on, not far from my house. Across the street was a newly renovated home for sale. From here I ran the app again, using “Courage” as my intention and choosing and “Void” and two points to look for. I was sent to either two addresses or a range of addresses (it wasn’t clear which). The actual point that came up on the map was here: 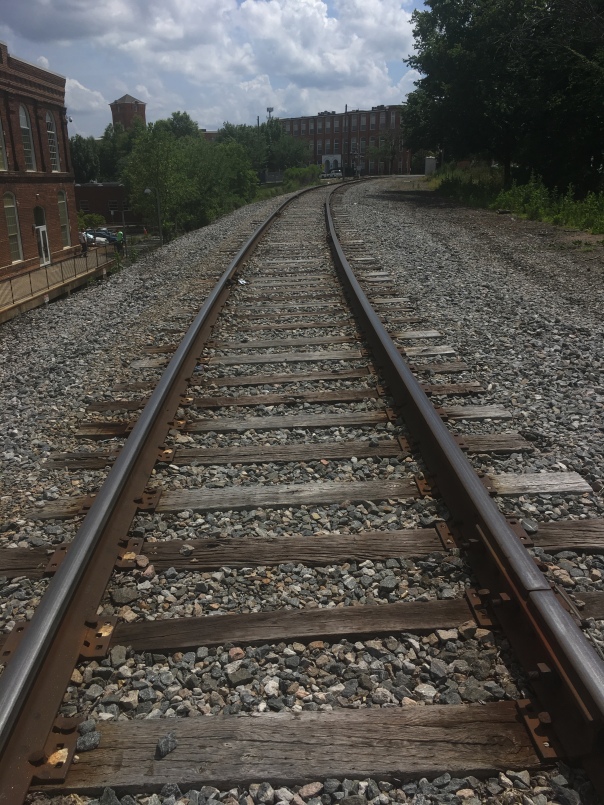 These are active train tracks that run north-south along the west side of Golden Belt, a Gilded Age mill and factory that is now a restored mixed-use complex. They’re built on a reinforced levee:

below which are the old tracks: 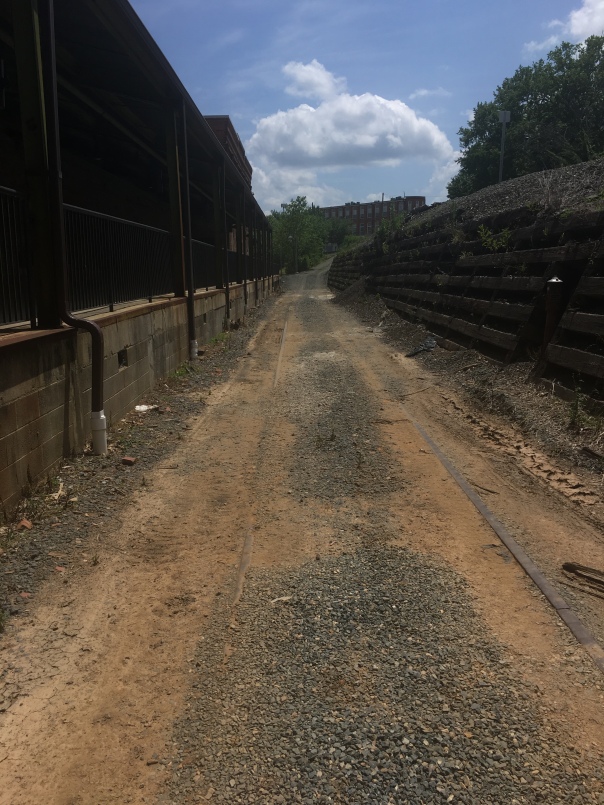 Next to those tracks is the old Golden Belt station platform, which dates to the era when the mill’s products were freighted directly from the factory to other cities: 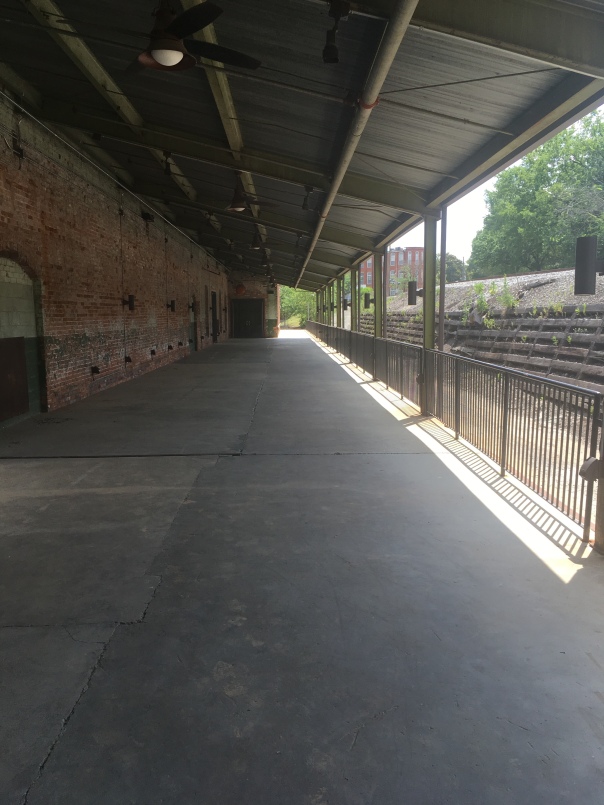 I had been to Golden Belt a few times previously, but did not know about this platform or that it included several informational plaques, such as this one: 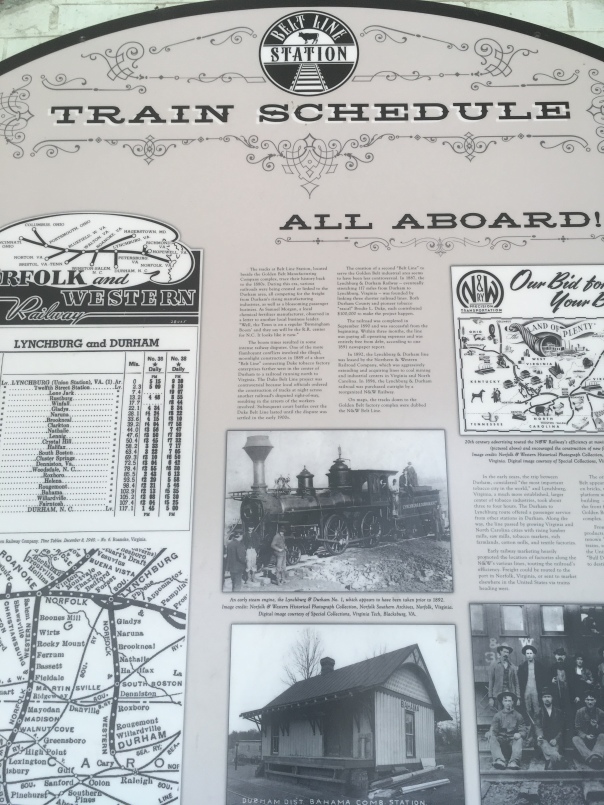 Back up on the newer tracks, this man was collecting cans:

I saw him again a little later as I proceeded south toward my next Randonaut point, which took me past this restaurant, which I’ve been by before but have never gone into, “Where the Food is Anointed… You won’t be Disappointed.”

My next point came from “Anomaly” and “Genius”:

Across the street from the Pole Enforcer: 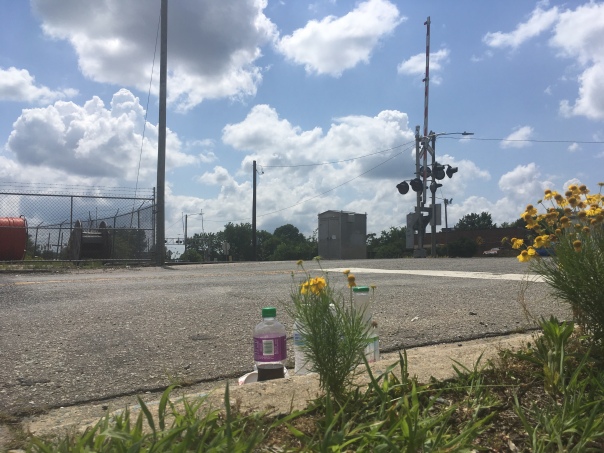 The building occupying the actual address I was given. These are the same tracks:

Signs of a car running parallel to these tracks:

I followed the tire tracks until they led to the place near where the north-south tracks turn until they run parallel with the east-west tracks. This was another place I’d never been and didn’t know about: 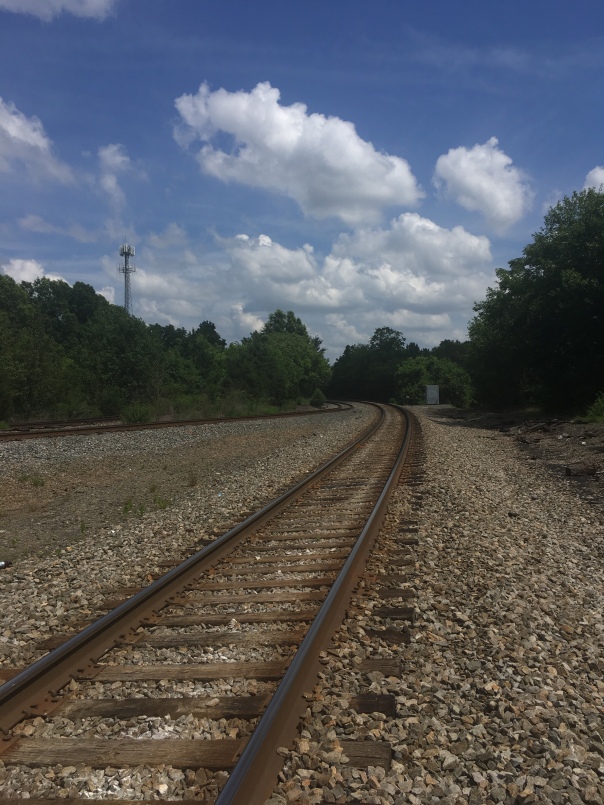 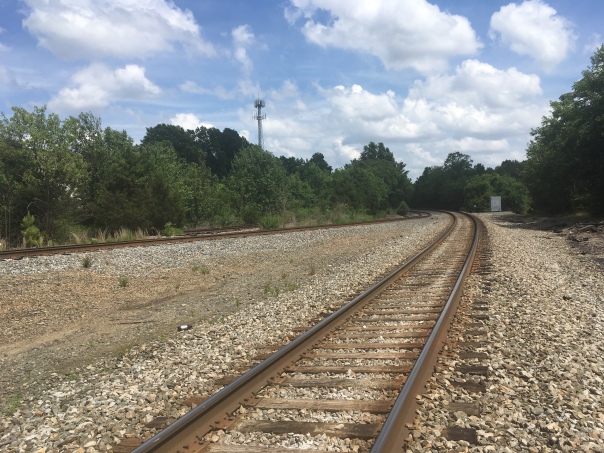 I set my next Randonaut point using “Strength.” I chose two points . I don’t remember whether I chose Attractor, Void, or Anomaly. The addresses didn’t seem to have an associated building. I had to cross here to get to the point the app chose:

The actual point was on the median between the exit ramp and the highway:

From here I could see the nearest building, the back of this fairly new residential complex, outside which a woman was walking her dog: 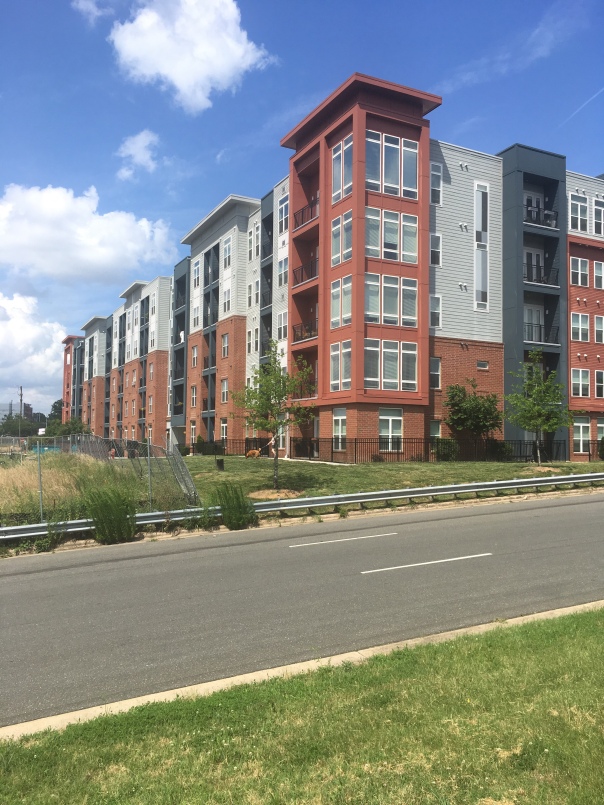 I had to go pick up some vegetables and was thinking of that when it was time to set my next intention, instead of setting an intention. You only get a couple of seconds to set one. I needed to go home and get a bag to bring to the place where I would get the vegetables. The app sent me to within a block of my house, in the parking lot behind the Durham Public Schools administrative building: 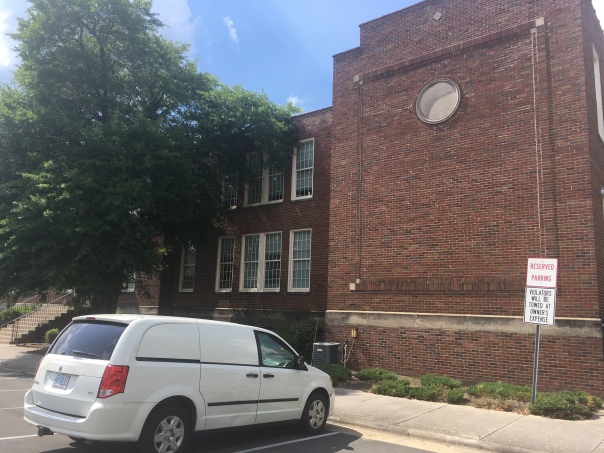 From here, the view across the street we live on, toward the church: 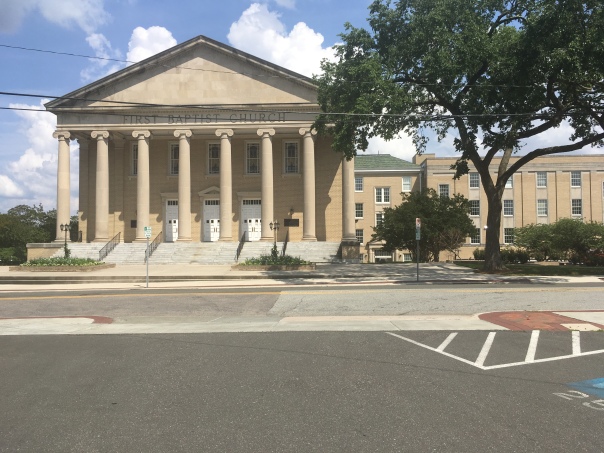 After I picked up the vegetables I used the app once more. I set “Strength” as my intention and chose one point. I can’t remember which of Attractor, Void, or Anomaly I selected. I arrived at the address just in time to see this pest control specialist driving away:

First he bid goodbye to these people, whose house across the street he had evidently been treating:

I decided to walk on a little further. In the next block, I saw this old station wagon, which I immediately recognized: 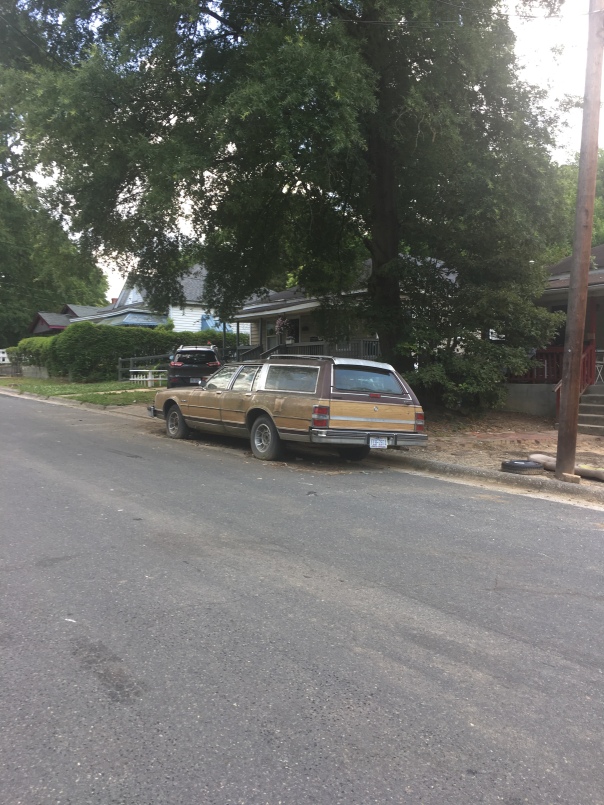 I’ve never seen this car in use. The front left tire is flat. It belongs to (or is associated with) a man I have often seen in Durham who always gets around on a bicycle. He used to live near my old apartment, about a mile or so away from here, over a decade ago, and the wagon was always parked in front of it. (It looked unusable then, too.) He is a slight, somewhat elfin man who wears a button-down shirt, trousers, and proper suspenders no matter the time of day or temperature. He has longish wavy hair, going gray. He is probably around 60. I’ve always wondered about him. He looks like a man from another time and place. I lost track of him a few years ago, but recently I’ve seen him riding his bicycle up and down our street, at least two or three times a week. He was on the porch of the house, which is a duplex, where the wagon was parked, but went inside the left unit before I could snap a picture.

I turned up Alston Avenue, where there was a park I had never known about. In the parking lot was a blue van I recognized:

The van and the arm belong to a largish man I’ve seen frequently in the last couple of weeks. He’s been parking the van in a gravel lot at the end of our block, 100 yards or so from our house. Once I saw several cases of bottled water in the van. I’m not sure if he lives in it. A few days ago, my wife and I saw him walking barefoot over the paved lot across the street from the gravel lot. The paved lot is the one Randonautica had sent me to before I picked up the vegetables.

After dinner, I went for a stroll that took me along a short street near our house that has an odd dogleg, isn’t a very helpful route anywhere, and is seldom used by traffic. I was passed by the elfin man riding his bicycle.